Tallinn, Estonia / April 22, 2022 / SEAPRWIRE / Heroes of Arcan, an upcoming play-to-earn epic heroic fantasy game that aims to place the destiny of the world of Arcan in the hands of players for both in-game action and development is set to launch a token and NFT sale event in Q2 2022 that will allow players to participate in the development of the world of Arcan and access ARCAN tokens prior to launch.

Of 100 million ARCAN tokens minted on the WAX blockchain, 14 percent will be reserved for the Heroes of Arcan play-to-earn model, 6 percent to a private sale underway in Q2 2022, and 12.5 percent for the public token sale. A further 24 percent will be held in reserve in a community wallet and used to reward players and ARCAN token holders that stake in the Heroes of Arcan DAO.

Heroes of Arcan, founded by Thomas Gio, is set to launch in mid-Q3 2022. Further information on the Heroes of Arcan project and token sale can be found via socials. 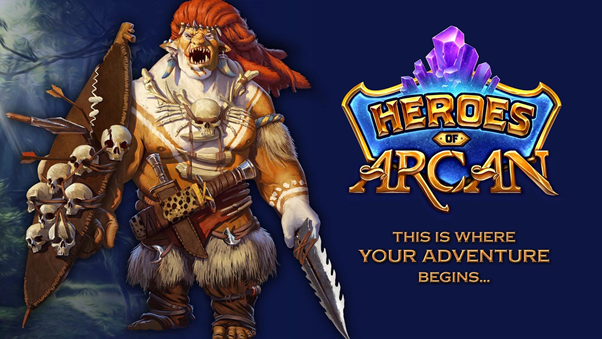 The play-to-earn gaming industry has created an NFT-fuelled revolution over the last year. Over the course of 2022, play-to-earn games saw over $4.5 billion in trading volume transacted through blockchain-based games across over 754,000 daily active wallets.

Many of the play-to-earn games available to players today, however, lack the narrative and multiplayer community features associated with games within the mainstream gaming market. In many cases, play-to-earn games place a strong emphasis on generating potentially valuable NFT-based game elements that can be sold for a profit through in-game or secondary markets for cryptocurrency.

Heroes of Arcan aims to disrupt the contemporary play-to-earn paradigm with an epic narrative-rich heroic strategy game that pits players against each other within a vibrant, evolving fantasy universe. Drawing from strategic resource and territory management games, MMOs, and hero-focused elements of MOBA games, Heroes of Arcan is positioned to bring the “play” back into the “play-to-earn” model.

Heroes of Arcan launches players into the fantasy world of Arcan, in which players join factions and compete over territory fractured by conflict, war, and magical catastrophes of world-ending proportions. The world of Arcan is represented by 20,000 individual land pieces, each of which is an NFT — players collect sources, build tools, and capture land in order to create structures and collect Heroes.

The epic fantasy narrative of Heroes of Arcan provides play-to-earn gamers with far more than a means of generating profit from their playtime — Heroes of Arcan developers have made a concerted effort to create a vivid world in which their players are able to form alliances, create and execute novel strategies, and create teams of powerful heroes.

While Heroes of Arcan integrates many of the features expected of a strategy play-to-earn game, such as upgradable equipment, structures and tools, harvestable resources, and in-game marketplaces that allow players to trade with one another, a number of unique social and governance features make Heroes of Arcan a highly disruptive presence within the play-to-earn market.

The resources, heroes, territory, and other gameplay elements of the Heroes of Arcan universe can be freely traded by players through an in-game marketplace. The way in which Heroes of Arcan handles trading in-game, however, functions very differently from the static, centralized models found in many other play-to-earn games.

Rather than operate in a vertical manner, the Heroes of Arcan economy integrates an organic growth model that promotes player-driven economic evolution and prevents economic imbalance. Arcanium, Heroes of Arcan’s in-game currency, is represented by the ARCAN token, placing control over the flow of value in the world of Arcan in the hands of players.

Transactions and trades made with ARCAN in Heroes of Arcan are subject to a tax, which forwards a part of fees paid by players using in-game marketplaces to a community wallet. ARCAN held in this community pool is used to reward players that stake ARCAN in order to participate in the Heroes of Arcan DAO.

Heroes of Arcan allows players to interact directly with the governance and development of the universe of Arcan by implementing a Decentralized Autonomous Organization model — players that stake ARCAN not only receive rewards from the community wallet, but can also propose and vote on changes that will affect the destiny of Heroes of Arcan.

The Heroes of Arcan economic model is supported by a horizontal gameplay system that ensures new players are able to gain a footing in the competitive world of Arcan, eliminating the centralization of resources and in-game power that occurs in other play-to-earn games.

Social interaction plays an important role in the world of Heroes of Arcan. New players of Heroes of Arcan choose a faction — the diplomatic Preachers, the warlike Conquerers, or the magically adept Wiser — to align with. Each faction is represented by a continent in the world of Arcan. Players in each faction are able to communicate with each other in dedicated Discord servers, opening the door to the formation of player alliances and guilds – or betrayal.

Economic sustainability within Heroes of Arcan is driven by additional features that will include mini-games, seasonal events, and territory updates. Early stages of the game offer power and economic scaling through resource collection, but later updates will provide players with the opportunity to improve and level up heroes, lands, tools, and equipment, create potions and enchantments, or build new architecture elements to add additional layers of economic complexity.

The lore that drives the gameplay within Heroes of Arcan provides players with a far more compelling storytelling experience than any other play-to-earn game on the market. Heroes of Arcan developers provide a robust narrative and history behind the world of Arcan, launching players into a world in which three factions compete for territorial dominance.

Heroes offer players a powerful way to gain passive benefits when collecting resources, as well as a means of exploring new territory and gaining access to randomized loot drops through chests.

The article is provided by a third-party content provider. SEAPRWIRE makes no warranties or representations in connection therewith. Any questions, please contact cs@SEAPRWIRE.com